Poems, songs, legends… Most of them are about love. What can’t we do for this strong feeling that has been an important part of our lives since the beginning of human history?

Some of us do not go beyond rationality, and some of us have no limits to making our loved ones happy. So, how far would you go to make the person you love happy?

Let us ask you a question. What was the biggest surprise you have done for love? You might think that the surprise you made was the best, right? What if we told you that Marcus Aurelius had brought enough sand from Egypt to Sedir Island to form a beach in order to make his beloved Cleopatra happy. Very romantic, don't you think?

We will tell the whole story of this magnificent gift, but first, let’s talk about the history of Sedir Island, witnessing an epic love story in history.

Sedir Island with its Historical Beauties

You may guess what Ceadrae means. It’s very similar to the world that you already knew its meaning. Yes, you are right; it means cedar tree (In Turkish, sedir ağacı). Unlike today, the island was covered with cedar trees in ancient times, and Sedir Island takes its name from these fragrant trees.

Do not be disappointed when we tell you that Sedir Island no longer has these fragrant trees. Cedar trees have been replaced by maquis, olive, and pine trees that are as beautiful as them. The beauties of the island are not only limited to its trees. The historical beauties of Sedir Island are next!

Sedir Island manages to steal the hearts of its visitors with its natural beauties as well as its history. The island is home to walls dating back to the Hellenistic period and before. Moreover, these walls are long enough to surround the north and south of the island. Although the walls amaze the visitors with their magnificence, the ancient theater with a capacity of 2500 people is the most striking structure on the island. The theater also has the distinction of being one of the three largest theaters on the opposite side of Rhodes.

Cleopatra Beach is the most well-known place on Sedir Island, which attracts visitors with its natural beauties, walls, and theater. The beach is the new home of the sands that went on an intercontinental journey. Now that we know enough about Sedir Island and Cleopatra Beach, it's time to go back to the love story that will warm your hearts! 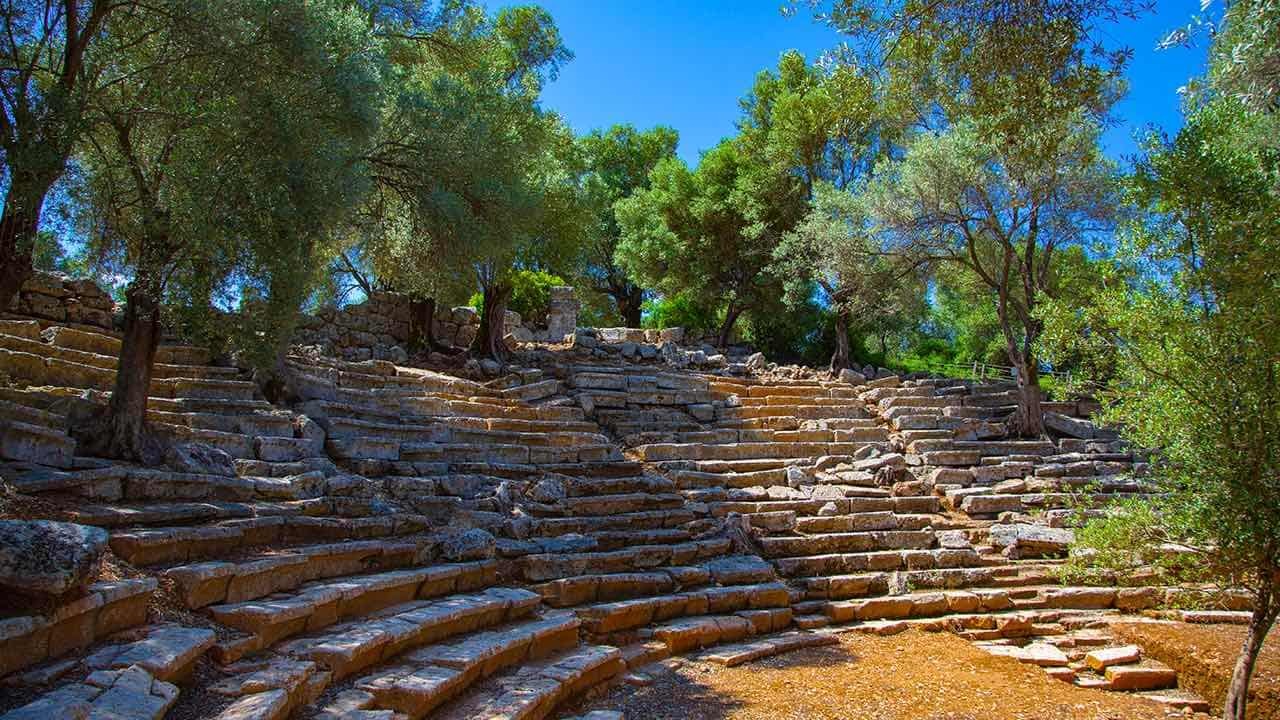 During the Roman Second Triumvirate (rule of three powerful individuals), Marcus Antonius takes the administration of the eastern Roman dominions and goes to Tarsus. According to the legends, he meets the love of his life, Cleopatra, the queen of the Ptolemaic Kingdom of Egypt, in Tarsus where his life changes drastically. But Antonius is not aware of this. Who can foresee the day when he will meet the love of his life?

In the beginning, what is important for Antonius and Cleopatra is their common political interests. Cleopatra aims to gain the lands she lost, and Antonius desires to have a strong ally with him for his attack on Iran. This political alliance, which will turn into an epic love in the future, is only a strategic collaboration at first. But there is love and love changes everything. They fall in love and they even face conflicts with their families denying this relationship. But you know, love is blind and it overcomes all.

The political alliance turns into love in time. Maybe, one of the most famous love stories in history… The moments full of love gradually turn into wonderful stories, one of which happens in Sedir Island.

One day, the couple, who goes to the island, spends a holiday that will not be erased from their memories. The island has everything: beautiful nature, a magnificent sea, gorgeous sunrises, and sunsets. Only one thing is missing: sand. Sedir Island doesn’t have a beach where golden sands meet cool waters. This shortcoming must have bothered Cleopatra so much that she pours out her heart to Antonius.

Antonius, on the other hand, cannot remain indifferent to the sadness of the woman he desperately loves and presents the legendary gift to Cleopatra. Antonius has a beach built by carrying sand to Sedir Island. We know it sounds crazy. However, upon the order of Antonius, a total of 60 ships of sand were transported from Egypt to Sedir Island. And the island finally gets its beach, and Cleopatra, for whom Antony has accomplished the impossible, gets her to wish.

Legends say that the unique coast of Sedir Island was formed in this way. Let’s talk a little bit more about why this coast is unique. Each grain of sand that makes up the beach is the same size and shape. The miracle of Sedir Island is not limited to this. The sands can reproduce by reacting with soda and so expand the beach. Looking at the color of the sand, a unique golden yellow is waiting to meet you. Wouldn’t you write your own love story walking on this beautiful beach? Then, hurry up and come to Sedir Island.

Click here to learn more about this magnificent island, famous for its nature, history, and legends.

5 Artifacts You Must See in Çorum Museum

Are You Ready to Museum From Home?