UNESCO Sites of Türkiye: A Magical City on the Silk Road, Ani

With its unique geographical position at the crossroads of the continents, the lands of Türkiye have hosted many civilizations living together throughout history. The people of these civilizations lived together by tackling life side by side, falling in love, fighting, and trading with each other. Naturally, they left the most impressive artifacts of the common cultural heritage of humanity on these lands. As Turkish Museums, we keep on exploring these valuable historical and cultural assets with you, including ones inscribed on the UNESCO World Heritage List.

Located on the historically important Silk Road, Ani Archaeological Site was inscribed on the UNESCO World Heritage List in 2016. Ani is a very special historical and cultural heritage hosting different religions and cultures. Thus, in the archaeological sites, it is possible to see the different architectural styles and constructions undersigned by each of them. In the northeast of Türkiye, 42 km from the city of Kars; the Ani Archaeological Site is home to the monumental structures remaining from an ancient city where peoples settled for 2500 years with important traces of Armenian, Byzantine, Seljuk, and Georgian urbanism.

Deserving to be described as “the land of kings on the Silk Road with a population of 100.000”, the Ancient City of Ani houses the monumental religious buildings of Zoroastrianism, Christianity, and Islam, and the remains shedding light on the historical development of the civil architectural tradition in the region.

The ancient city of Ani contains 21 structures, including the ones surviving to the present day almost intact. Ani was built on a high and easily defendable rocky cliff in the west of the Arpacay Valley, forming a natural border between Armenia and Türkiye. In addition to these structures, the rock-cut structures in the valley of the Bostanlı River are also regarded as a legacy of the ancient city. Let's explore the structures in the Ani Archaeological Site together.

The Ancient City of Ani was divided into three sections: The citadel, the walled city, and the outer citadel. These three sections house impressive structures giving an unmatched architectural history lesson in the open air.

The citadel involves the ruins of the Palace of Kamsaragans, Midjnaberd Church (including the Tomb of the Prince Children), Karimadin Church, and Palace Church (Surp Sargis and T'oros, Kamsaragans), Sushan Pahlavuni Church and the Church with Six Apses (St. Eghia). The remains of these structures could be considered architecturally precursors to existing structures in the ancient city, and many display matchless or rare features of their kind, surviving to the present. 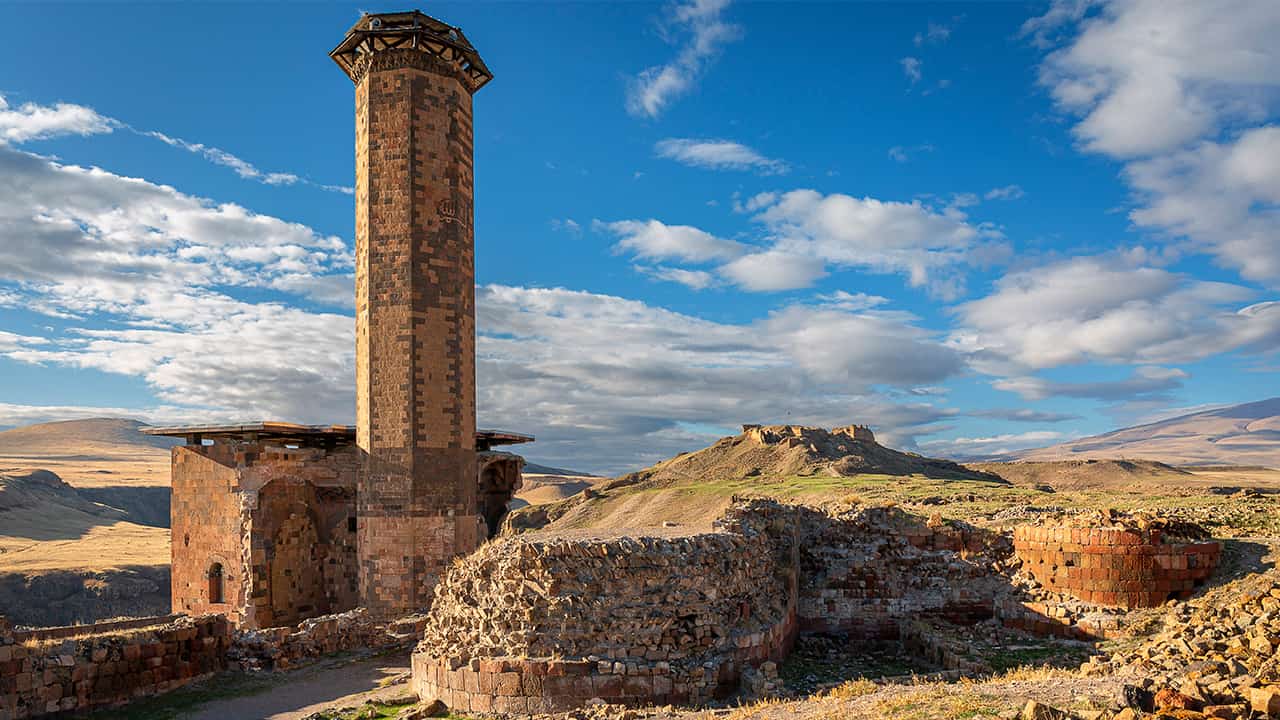 Architectural History Lesson in the Open-Air

It is not easy at all to choose the most important ones to explore among so many impressive structures with their historical value and aesthetic qualities. Each of them can be a subject to be discussed in detail. Besides the outstanding Christian and Muslim sacred places on the site, the remains of the Fire Temple, thought to be built between the 1st and 4th centuries, represent a different religious approach, Zoroastrianism, standing out with its historical value. In addition, among the worth, visiting structures of the area are the Manuçehr Mosque, the first mosque built by the Turks in Anatolia, and the Cathedral, built by Master Tiridat who also repaired the Hagia Sophia Cathedral, and which was transformed into a mosque after the conquest of Ani.

Birdhouses carved into the rocks outside the ancient city and rock-cut structures on the slopes of the Bostanlar River valley are among the areas of the Ani Archaeological Site, immersing its visitors in daydreams about human history.

As one of the most important archaeological sites in the world, Ani Archaeological Site awaits its visitors with its atmosphere of unique multiculturalism and with its structures giving architectural history lessons in the open air. Rather than an archaeological site, Ani resembles a very special location history is preserved.

5 Artifacts You Must See in Çorum Museum